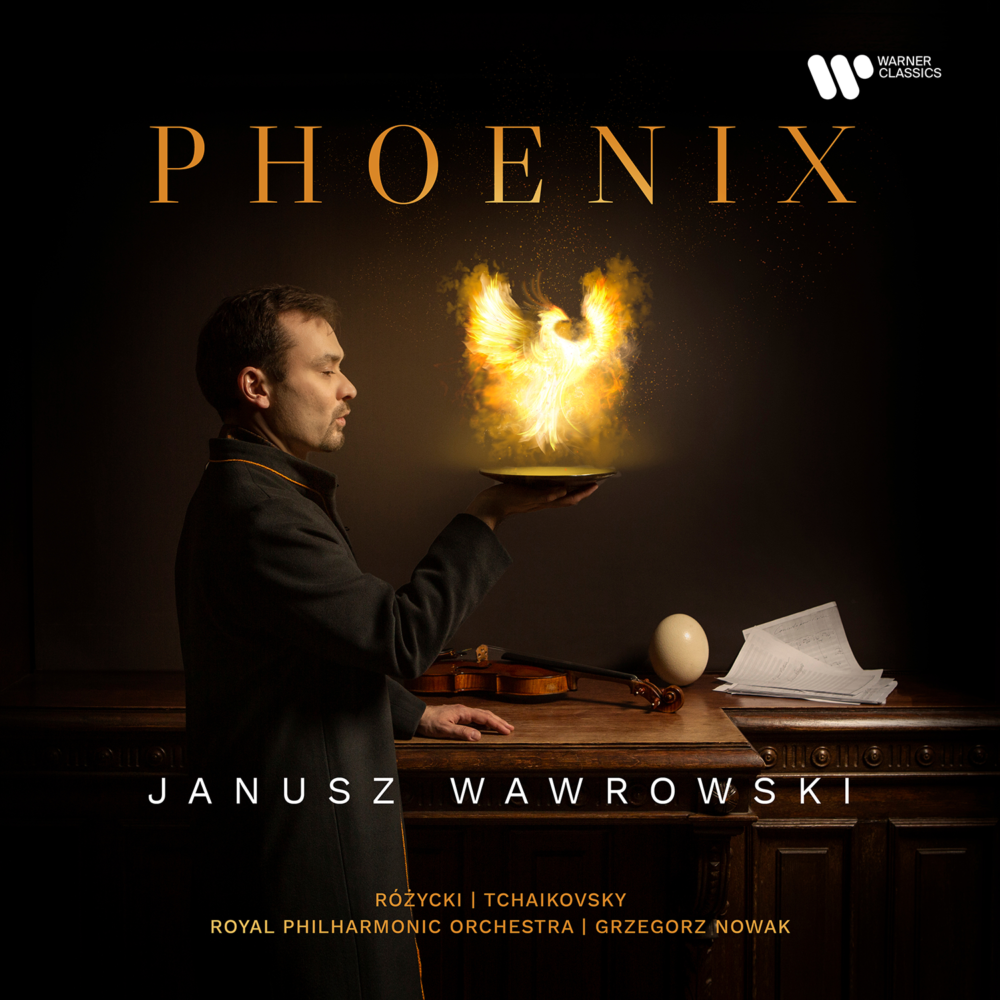 a perfect gift in style of phoenix!

Exclusive offer to order the Phoenix album directly on this website – together with a limited edition postcard signed by Janusz Wawrowski,  a souvenir sticker, packaging and postage, sent to your home anywhere in the world for only

A unique chance to order the Phoenix album together with a limited edition postcard signed by Janusz Wawrowski,  a souvenir sticker and last years award winning album “Hidden Violin”. All this including packaging and postage, sent to your home anywhere in the world for only 28 euro !

“The temperature is hotter still on Janusz Wawrowski’s album Phoenix when the Polish violinist drives his bow through the searing melodies and virtuosic dazzle of Tchaikovsky’s Violin Concerto. Wielding a gorgeous 1685 Stradivarius, Wawrowski excels in dark lustre and is magnificently supported by the Royal Philharmonic Orchestra conducted by Grzegorz Nowak. It all makes for a genuinely exciting and fresh account of one of the repertoire warhorses”.
– Geoff Brown, The Times ★★★★★

“Wawrowski’s enthusiasm for this concerto is appropriate. Ludomir Rozycki’s 23-minute, two-movement concerto, though very backward-looking at the time of composition, i.e., late Romantic, is truly appealing. The lyrical-rhapsodic and rather short first movement is followed by an extended final movement that is quite contrasting, though mostly powerful and dance-like. It is splendidly played in this recording, with rich tone by the soloist, who really does all he can to make this concerto effective”.
– Remy Franck, Pizzicato ★★★★★

Rising from THE ashes…

Janusz Wawrowski’s last Warner Classics album was Hidden Violin, a celebration of Polish composers and of his instrument – the Stradivarius ‘”Polonia” of 1685, the first Stradivarius to have come into Polish ownership since World War 2. His new album, Phoenix, could be subtitled ‘Hidden Concerto’. It pairs violin concertos by Tchaikovsky and the 20th century Polish composer Ludomir Różycki. While the Tchaikovsky has long been one of the world’s favourite violin concertos, the Różycki – an opulent post-Romantic work conceived during the traumatic Warsaw Uprising of 1944 – was never performed in the composer’s lifetime. Wawrowski premiered it in its current form as recently as 2018. For years, the elements of the score lay buried in a suitcase in the garden of Różycki’s deserted and ruined house in Warsaw.

During World War 2, the people of Poland were brutally oppressed by the occupying forces of Nazi Germany. Polish artists were monitored by the Gestapo, whose aim was to extinguish the country’s cultural identity. Różycki, born in 1883, had studied in Berlin in the early 1900s with Engelbert Humperdinck, the composer of Hänsel und Gretel. After World War 1, when Poland had gained independence from Russia, he was a member of a group of composers (including Szymanowski) who sought to reinvigorate their country’s music. He enjoyed particular success with his music for the ballet Pan Twardowski (1920), the story of a 16th century nobleman who makes a Faustian pact with the Devil.

Różycki worked on the violin concerto in the summer of 1944. (The Warsaw Uprising took place from early August to early October.) With the score well advanced in a version for piano and solo violin, he needed to complete the orchestration and, not being a violinist himself, to spend some time with the virtuoso Władysław Wochniak on the technical aspects of the solo part. When it became clear, however, that he and his family were in danger from the Nazi forces, Różycki decided to escape Warsaw – but not before he had hidden the manuscript in a suitcase and buried it in his garden. His house was eventually destroyed and after the war, Różycki, now teaching and composing in the city of Katowice, some 300km south-west of Polish capital, resigned himself to the loss of the concerto. He died in 1953. The buried suitcase was discovered by construction workers clearing the ruins of Różycki’s house in Warsaw and the scores that it contained found their way to the archives of Poland’s National Library.

Janusz Wawrowski takes up the story of the concerto. “It was some years ago that I first encountered fragments of the manuscript of Ludomir Różycki’s violin concerto. This wonderful work spoke to me immediately, and the thought was planted in my head that, like a phoenix rising from the ashes, it should be reborn and enjoyed by audiences around the world.” With the help of a researcher and much scouring of archives, he managed to find the manuscript of the piano reduction of the concerto and, crucially, the first 87 bars of the orchestrated full score. Other musicians had already made completions of the concerto based solely on the piano reduction, but Wawrowski, working with the pianist and composer Ryszard Bryła, set about recreating the work, taking a crucial lead from the orchestrated fragment. He also edited the solo part to ensure that it lay well under a violinist’s fingers. The project took several years.

On this album I decided to compile Ludomir Różycki’s Concerto together with Tchaikovsky’s Violin Concerto which is of course well known to all music lovers. Both of these works share a romantic character, a specific overtone fantasy and fairy tales, whilst each composer wrote these works in painful periods of their lives  – Tchaikovsky after a difficult breakdown of his marriage and Różycki during the war, in the year of the outbreak of the Warsaw Uprising (1944). The melodies seem to enchant dark reality, bring perspective and create a world better than the real one. Tchaikovsky is an exceptional composer for me, the first one with style and creativity resembling film music, although it was written long before the era of the movie theaters. Both composers treat the orchestra in a colorful, visual way – they both wrote operas and ballets. I associate Różycki’s work with Gershwin or Korngold, leading directly in the Hollywood style, but also exploring a Slavic note. Różycki treats the solo violin part similarly to Tchaikovsky. Their compositional techniques are alike and a manner of imagining this instrument part on top of a symphony orchestra, even though Różycki created his work 65 years after Tchaikovsky, having a much wider instrumental range at his disposal.

Piotr Tchaikovsky’s violin concerto has accompanied me since I was a child. Everyone knows it well, violinists all over the world perform it on stages and competitions, and indeed it brought many awards also to me. Paired with Różycki’s Concerto – recently discovered, and unknown to the wider public – and thus forming a very powerful musical duet. Both of these works take me to a fantastical world of imagination, dreams and miracles. I really do hope that my feeling of this special sound-world is shared by the listener, whilst in turn PHOENIX becomes a recording in their collection to revisit time after time.

Released with the Music and Dance Institute, co-financed by the Ministry of Culture and National Heritage.

This project is part of the commemoration of the centennial of the regaining of independence and rebuilding Polish statehood.
Released with the Adam Mickiewicz Institute.

Realized thanks to the courtesy of The University of Warsaw Library and The Warsaw Rising Museum.

Many thanks to Maciej Radziwiłł and Trzy Trąby Foundation.